A tortoise found with a severely broken shell is now in recovery thanks to the donor-driven Spirit Fund at County Animal Services.

A good Samaritan found the injured animal in Fallbrook on Sunday. The Samaritan said a neighbor’s dog had chased the tortoise and it fell from a 10-foot wall. When the animal fell, he landed on his back and his shell broke in three places.

The 70-pound tortoise was taken to a veterinary hospital and that’s when County Animal Services was called in. An animal control officer took the shattered tortoise to a veterinarian that specializes in reptiles for emergency care and observation.

The African spurred tortoise is a male between 35 to 40 years old. They typically live to be 70 years old. County Animal Services learned it would cost several thousands of dollars to put the tortoise back together again.

“We have a donor-driven Spirit fund that we can use for severe medical cases such as this one,” said County Animal Services Director Dan DeSousa. “This tortoise will get the extensive, aggressive care and long-term observation that he needs to regain his health and hopefully live to a great, old age.”

The veterinarian put the broken shell together again using screws, wire, epoxy and plastic wrap. The photographs show the animal from the front with his head tucked in. 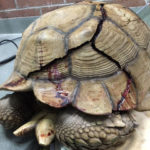 The tortoise will undergo extensive reconstruction surgery on Tuesday. The greatest concern now is a long term infection, but with this medical care, the tortoise had a fairly good prognosis.

Meantime, County Animal Services is looking for his owner. If the owner can’t be found, the tortoise will not become available for adoption. He’ll be transferred to a rescue group that has the training and qualifications to provide the necessary care.

The Spirit Fund was created in July 2008 after a puppy was found severely beaten near the border. The dog was still loving despite her injuries and staff named her spirit. Her story brought donations for her care from across the country. So much money came in that the Spirit Fund was set up to care for other animals with severe medical needs. Over the years, the fund has continued to grow. Anyone interested in donating, can visit the Spirit Fund web page.